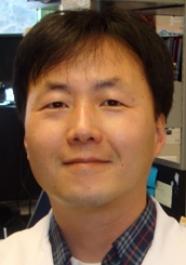 Dr. Lee’s primary research interest is the cellular and molecular mechanism of neurodegenerative disorders, especially Alzheimer’s disease. As a research fellow at the Nathan Kline Institute and NYU Grossman School of Medicine Department of Psychiatry, Dr. Lee has been extensively involved in analyses of autophagy and the pathology of the endosomal-lysosomal system changes in relation to neurodegeneration using in vivo Alzheimer’s disease (AD) animal models. As part of the Center for Dementia Research team at NKI, Dr. Lee conducts studies at the cellular level to identify the early changes in neurons that lead to the onset and progression of AD. His work has identified changes in one of the surveillance systems inside neurons, known as autophagy, that underlie the functional alterations in the brains of AD patients. The current goal of Dr. Lee’s research is to perform a complete molecular dissection of those changes with the aim of developing novel therapeutics that could slow down the progression of the disease or even prevent it. Consequently, his studies will have a significant impact on improving public health care for neurodegenerative diseases, particularly AD.

As a co-investigator on NIH-funded grants, Dr. Lee laid the groundwork for the proposed research by developing effective measures of in vivo lysosomal pH, enzyme activity essays, autophagy activity assays, and other signaling factors monitoring methods relevant to neurodegeneration that will make it possible to evaluate and further define mechanisms underlying AD pathogenesis. Dr. Lee has expertise in (1) transgenic mouse engineering, (2) confocal microscopy including live imaging of primary neuron, and (3) bioinformatics analysis of large data sets related to autophagy and endosomal-lysosomal dynamics in neurodegenerative disorders. In addition, Dr. Lee has successfully collaborated with other researchers at NKI, nationally, and internationally. He has published numerous top tier journal articles (e.g., Cell) and his research has been highly cited by other investigators. Also, he has served as a reviewer for a number of international journals including Autophagy, Aging Cell, and Neurobiology of Aging.